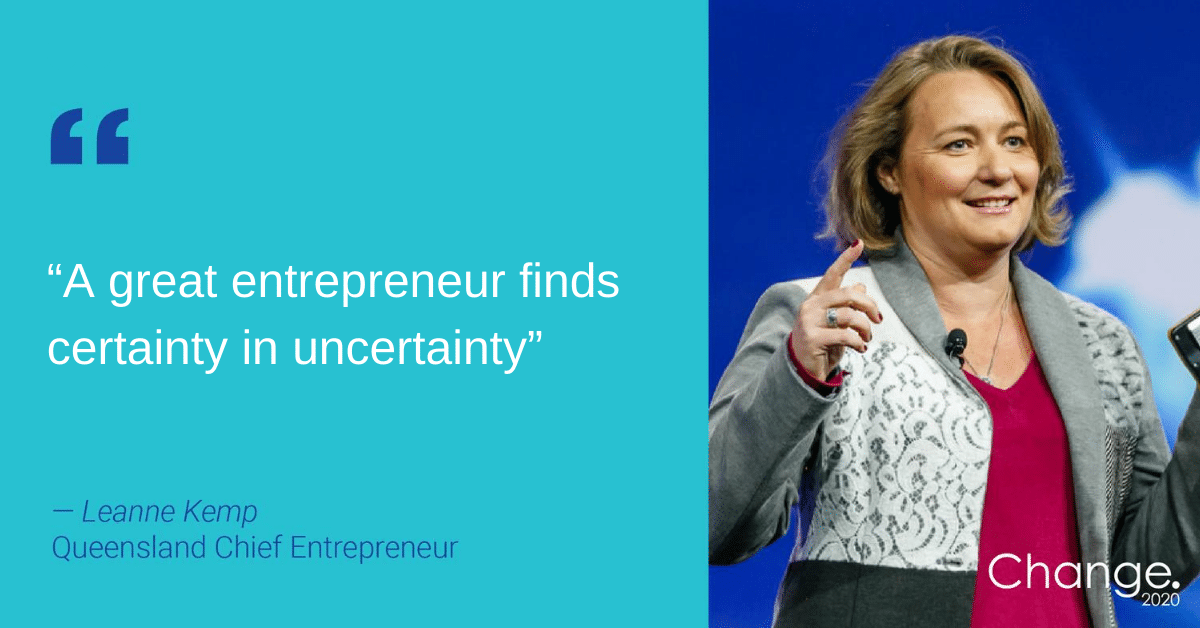 Why leaders must be willing to unlearn to be able to relearn.

Leanne Kemp is Queensland’s third Chief Entrepreneur, plays a vital role in building and promoting the importance and contribution of entrepreneurship and investment in Queensland. She is also the founder  CEO of Everledger, an award-winning technology company that creates a secure and permanent digital record of an asset’s origin, characteristics and ownership using Blockchain technology.

To kick off our Change2020 conversation series, Director Kerryn Fewster sat down with Leanne to discuss how she identifies with change and the role leaders play embracing ambiguity.

What does change mean to you?

People look at entrepreneurship from the outside and say, ‘you’re in a constant flux of change’. I don’t really resonate with the word change. A great entrepreneur finds certainty in uncertainty. That space in time where you have the self belief that you know the challenge that you’re solving, and if you’re not able to solve it yourself, you’re able to be so resourceful to find the right people, the right technology, or spend the time to research how to go about solving it.

Do you have any tips on how you can find certainty within uncertainty’?

The purpose of our organisation is to help leaders lead their teams to be fluid and move forward. How do we help them to build that curiosity, that desire?

“Systems leadership, the ability to corral that frozen, middle within corporations is probably the unlocking of some of the most powerful elements of an organisation. It’s a bit like melting the permafrost layer. And it takes courage to be able to really say, ‘I’m open to that.”

The newer workforce that’s coming through are much more focused on being ‘purpose led’. There feels to be a disconnect between this and some of the leaders we have in some of our largest organisations. What do we do to help them to lead and inspire this new generation of workforce coming through?

I’d argue that they’re not going to lead and inspire the new workforce coming through. The power of systems leadership is going to be the one where the leaders will start to sit and question and pontificate parts of the movements that are happening.

I think the most powerful leaders in the world are those that are connected to the understanding that leadership happens not only from decision making down points, but actually having the ability and the willingness to enable a team to be like water, to go around the rocks, over the rocks, penetrate through the rocks.

Have you yourself experienced failure?

On a constant basis. I make mistakes day in and day out, whether that’s mistakes with people you know – misjudging myself or people’s potential or the potential of technology. But I have this inbound curiosity to get up every day and seek out the learnings.

“Life for me has been one of the best universities in the world. It’s not bound by books, but bound by experiences.”

How would you describe yourself as a leader?

At Everledger we did an exercise called Mrs Potato Head, which is “what do you want your CEO to look like?”. I realised that I’m a different set of personalities and personas to different people depending upon where they are in their journey, both technically or as a part of their leadership and management. So when you describe who I am as a leader, I would say that… I have the ability to be very many different potato heads.

How do you go about leading when you’ve got staff members and in six different countries?

The most exciting part for me is the fact that people come from different dimensions in time, different lived experiences. I think to be open to the human element of ‘why we are all here’ is probably the most important part of building a culture and enabling it to take up its own personality.

Preview(opens in a new tab)

In the first year or so at Everledger the culture, the values, the purpose were all driven by me, particularly as a sole founder. But a willingness to allow the child in its adolescence to form its own personality is really the sign of a great leader. Often you’ll see parts of leadership really holding on to the values of what it was when it was created and that’s not necessarily healthy. You wouldn’t do that to a child,so why do that to a business?

What’s your hope for the next generation in terms of what our future looks like and how they’re going to embrace the opportunities that come from uncertainty?

The older generation is  starting to say ‘how can I really give in and give back to the next generation?’ Today’s digital natives are inherently born with skills and this dexterity with technology that over time I’m struggling to keep up with.

The next level of leadership that’s coming out in high schools into universities understand that entrepreneurial pathways are super highways into the future. And if we can instill the way upon which leadership shines through that way of thinking, then what a great place to be in the end of 2030.

For more information on adapting to uncertainty, speak to one of our consultants.