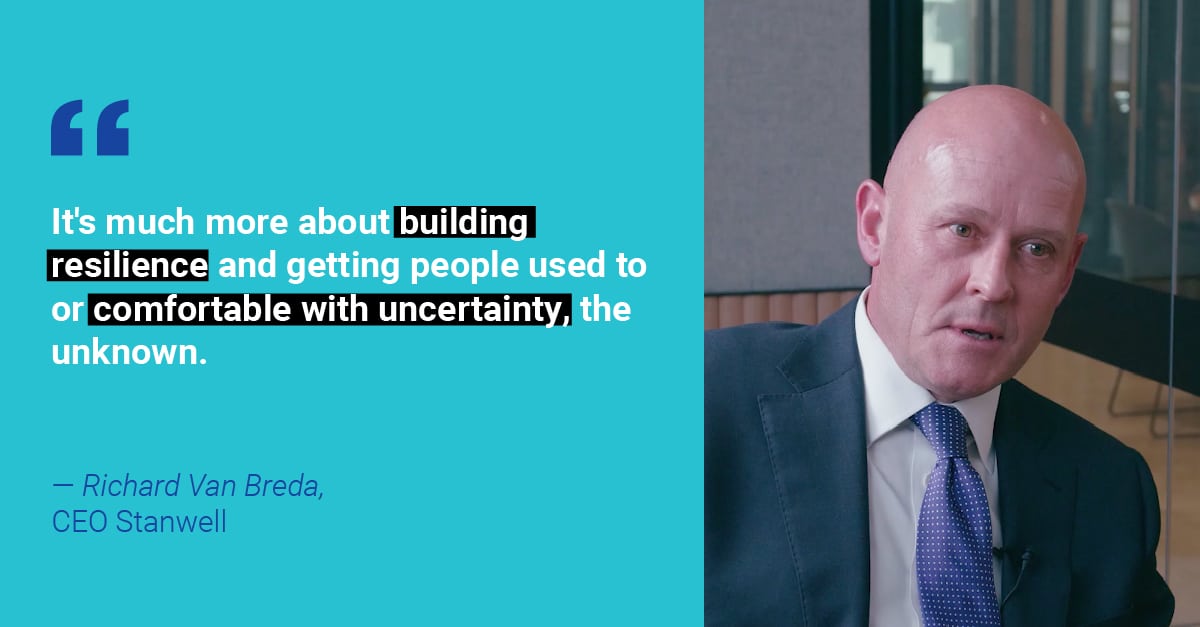 Stanwell’s Richard Van Breda shares insights into why empathy is more important than sympathy to lead others.

Richard Van Breda, CEO of Stanwell, is an expert in change management having adapted to new locations and roles his whole career. Born in Zimbabwe, Richard started his career at Deloitte Haskins, before moving to become the CFO for PVC exclusion extrusion company. When he arrived in Australia in 2011, he joined Duke Energy before moving to Stanton Corporation as Controller. After a merger in 2012, he became Chief Executive Officer of Stanwell, a role he still holds today.

A guest in our Change2020 Conversation Series, Richard sat down with Director Kerrn Fewster to discuss how he leads his life as a change-marker.

Is the ability to explore new opportunities innate to you or is it something that you’ve learned?

I’ve got better at it. I grew up in the early 70s and 80s where Zimbabwe was going through war. As a family we moved around a lot. Spending time in Botswana, the UK, and even in Zimbabwe we lived in a number of different cities, meaning you just had to adapt.

You mentioned the word ‘adaptability’. Has this helped you as a leader, leading yourself and others through change?

Embrace the change and uncertainty, that can be a challenge. If you embrace it, you’ll see opportunities in it.

As the leader of the organisation [Stanwell], how do you keep confident that you’re abreast of the developments and trends and that the conversations you’re having are relevant to take the business forward?

It’s multi-faceted. It’s actually making sure that you’re not in the detail but instead surrounding yourself with a good executive team who is prepared to tell you what they think and who aren’t afraid to speak up.

There is no way I could know everything and I certainly don’t intend to, but it is relying on those people to keep you abreast of what’s happening. It’s important within the executive leadership team that they recognise they’re making decisions for the whole organisation. It is important that this team works well together, is open, transparent and has high levels of trust.

In Australia, sometimes we can be a little parochial. So I always try to keep the channels open. I read the newspapers, not just energy publications, but an array of different media. It’s keeping in contact with industry bodies, the wider business community and not losing touch with your local communities. There’s a whole range of things and it’s trying not to limit yourself, keeping your perspectives open and ensuring that you don’t close things down.

“Any good CEO will recognise the importance of the team. Always hire people smarter than you, that is critical.”

You’ve gone through a couple of major downsizing activities. How do you prepare yourself personally to embark on such a change?

If anything like that ever becomes easy, then you’ve got a problem as an individual. Those decisions should never be taken lightly, because you’re impacting people’s lives and those experiences are probably the worst that you have to deal with.

I think preparing yourself is always a challenge, It’s understanding the why. It challenges you personally and makes you wonder ‘have I made the right decision?’. You need to be authentic and you need to be real about it. It’s never easy to do those things and you never take those decisions lightly, but once you’ve made them, it’s important to have a clear plan.

“It’s not about me, it’s about everyone else”. But who looks after you?

It’s sharing in the executive leadership team, not necessarily sharing the pain, but being able to have those conversations. It’s also having things outside of work, like a social circle and friends. It’s making sure that you have your own personal time to think and to do something else, which is really important. You’ve gotta be able to share the empathy, but there’s a point where you actually need to be quite firm with yourself as well.

How do you get from feeling empathy to holding yourself to account? What are your techniques?

It’s about feeling the empathy but not sympathy – there’s quite a difference.

Understanding that person’s point of view, but they’ve also got to work themselves through it.

The only way to grow is to put yourself in a place where you feel uncomfortable. Do you think in your experience, that is the norm?

I think there is an element, certainly in Australia, where we can be quite closed. I think we can get comfortable, but certainly in the energy industry we’ve recognised that we are only going to be successful if we look beyond ourselves. We focus more on our customers, our communities and our stakeholders.

I think there’s probably a change in mindset and it comes back to the whole corporate conversation.

What are the roles of corporates? Is it just about shareholder returns or are CEOs and C-suite allowed to have views on other things?  As an organisation there is no doubt that returns for our shareholders are very important, but we have a huge role to play in our community and making sure that our people can contribute to those communities as well.

CEOs are always learning and they recognise the importance of lifelong learning.

Proper change is about those conversations. About being authentic, empathetic and spending that one on one time rather than issuing a direction. That is where we need to change our view on ‘change leadership’ and ‘change management’. Organisations need to be responsive and nimble. That’s the only way we’re going to survive as an organisation. We need to learn to adapt.

How do you build curiosity and resilience into an organisation’s culture?

Once you recognise the importance of diversity in opinions and you’re happy to have debates, I think that drives a change in culture. In my experience it takes time, of course it takes time. It’s a conversation on priorities. You’ve got to get the right people, taking that step forward and set forward for the future.

It’s much more about building resilience and getting people used to or comfortable with uncertainty, the unknown.

What do you think have been learnings for you that you could offer to our audience?

You have to surround yourself with people that are smarter than you in their particular areas and you need to develop that trust. That is critical. It’s amazing how trust develops when you’ve been in the trenches with somebody, and we talk about mateship but it is an element of that.

Another one would be hire really well. We’re going through the process now of looking at graduates coming into the organisation. We’ve probably had the highest number of graduates apply for roles that are in mechanical engineering.

Lastly, promote diversity and diversity of thought. I’m not just talking about gender. Gender is very important because it is very visible. But having that diversity of opinion and experience and being open to accept that people have got different views. I think that is probably something that we’ve fallen really short on over the last couple of years in Australia.

For more information on adapting to uncertainty, speak to one of our consultants.